Skip to content
So here is a little piece on Cayambe, or how I felt when climbing it. We didn’t make it to the top of the volcano; you can probably tell that I am a little disappointed by that. However, while we sat on the shoulder at 5400 metres, we saw a sight that we wouldn’t have seen at the summit, and I felt extraordinarily lucky to be there.

A bedtime before sunset,
Furlongs of restlessness rolled into the down bag,
and woke up in the brightening blackness to hear
The ecstatic sound of a liberated waterfall
And the short-sighted cataracts in my eye visualise the summit
While an injunction pounds in my head: climb the mountain, do it now.
After a sleepless sleep, we rise
Strap on our equipment to do battle,
Take a strategical vomit
And fortify ourselves against milque-toast thinking
With soft white bread and dreams of planting the flag
In the purest flour of summit snow.
Troops assemble outside the refuge;
Now our band of three appears rather small.
Into the night we go:
Above the studded palm of a town, told in fortune-teller’s lights;
Stars falling ahead, luminary lovers crossed with snow that scuttles past
On its way to bedrock.
Still, to our left, a tangential slope of ice, the angle remaining a theorem
as we tackle the intermediate problem
Calculating the physics by which crampon strikes ground.
And still, still ahead, the great white wall rises, a wall projected, waiting to be vandalised.
The time must go
And the night also rises, the swell of its hand
As it stretches to swat:
Blocking out the stars, not one by one
But in sweeps and washes of a black paintbrush.
We can’t see it, but we are walking on the beast:
the great grey back of the glacier, the ancient creature with
A cracked and misshapen mantle as though it were shedding its skin
Crevasses that yawn and shake off the night’s white sleep
A wide grin, narrowing off to a dimple that we trace
And tenaciously, jump
the grimacing gap.
Through the waves and undulations of our fear, sickness, fatigue
We pass to find the perfect storm frozen at the shoulder
And stayed a while, to watch the crest
Of a new dawn rise behind the sleeping monster
See: Lilliputian workers measure their strength
in lengths of pick-axe, marks staggered up the hill;
Crampons put the force behind their words: I am here to take you on, beast 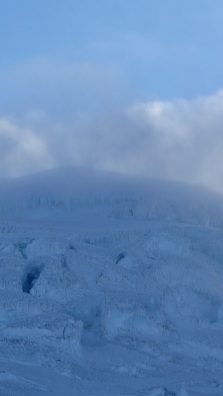 And as I watch them climb the peak
See my summit recede before me
Overland ants climb into the rosy dawn
We turn, exhausted, to begin the descent
Back to the ground, where words are needed
Strength measured in sheets not pick-axes
And where moles make mountains I don’t want to climb
We get a surprise: gift-wrapped in myth and meteorology
For being there, forsaking the summit
It appears this is the right place and time
For the hills to the south are spun with gold
That mantles here and there their deepening green
The peaks rise as tree-tops through the mist while
Skeins and spools of clouds twist on the loom of the wind
And yet we can see the rivers of cloud to the west
That fill in that whitening blue
And begin to scribble the story of the coming day;
They wouldn’t have this view, up there.

The National Institute of Seismology, Volcanology, Meteorology and Hydrology (INSIVUMEH) provides a great deal of information on Fuego. Find it here.

My publications are updated regularly. You can find them and download them for free here.