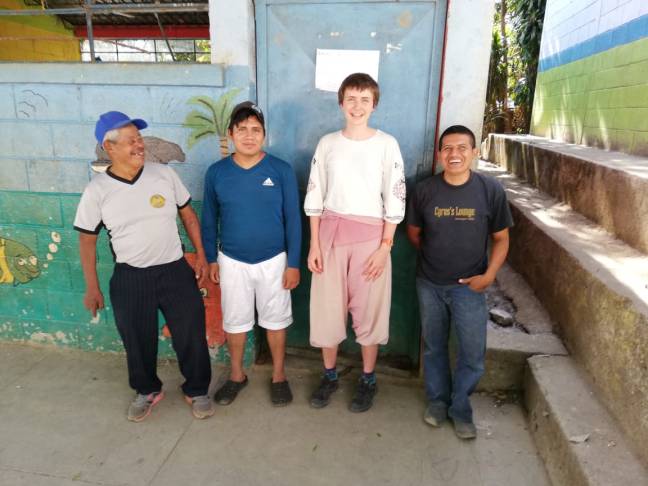 It has been an intense couple of weeks at the observatory – so much so that I wasn’t able to publish a post last weekend! (More on that on next week’s blog post.) This was written on 10th March 2018, at the end of Week Four of Nine total. I hope you enjoy it.

As the mangoes ripen on the trees, and back home winter softens into spring, I am settling into the shade of life in Guatemala. It’s late summer here and the ficus trees provide deep wells of cold shadow among the throngs of basking flowers. The first heavy rains should come in May – but maybe in late April, or even June. Who knows?

Local work ethic is everywhere. In the slender cool air of 6 a.m., Antigua is lively with the smell of cooking oil and cries of “Guate-Guate-Guate!” as workers catch the bus to the capital, holding a greasy breakfast from a street vendor in their fist. On the other hand, preparedness is a quality in short supply – do calendars even exist here? – with plans frequently changing at the last minute, everyone perpetually double-booked, and every deal open to alteration. Coming from a country and a university which holds engagements as certain as thunder following lightning, I find this unpredictability a little hard to adjust to. I wonder, though, whether considering plans as ‘fragile’ (furthermore, the ubiquity of this idea that suggests it’s a matter of culture, not personality) is instead a mature acknowledgement of our momentary presence in a capricious environment. While heavily deprived in some areas, Guatemala is wealthy in hazards: floods, hurricanes, volcanoes, earthquakes. This database gives a brief introduction (exposure to volcanoes at bottom of page).

In the spirit of Guatemala, my research seems to feel more natural if I deviate a little from the plan. Over the past week of interviews (yes, my wish was granted!) I have noticed that if I hold my questionnaire tightly in my mind, the conversation feels forced. In contrast, when I give myself permission to show empathy, to pursue avenues that my conversational partner starts down, to go off-track, then a dialogue develops. These diversions are an enjoyable ramble, and often they lead back to the starting point– so I can ask the question I originally wanted to ask. Meanwhile, the ramble leads you past some unexpected stories.

And what fascinating stories! There was the man who told me that Fuego’s eruptions are a precursor to the Second Coming of Jesus Christ – and that I could find proof of this in the deviancy of young LGBTQ+ couples (What to do if you’re part of the ‘problem’?). There was also the woman who talked of the evacuation last November of her town like it was a festival. She and her husband brought coffee and cake out into the yard to watch the people evacuating in panic:

“oh, it was fun, the people running to and fro, and I stood there with my coffee laughing!”

I still have not heard any legends associated with Fuego. I am surprised that such a marvellous natural phenomenon is not (apparently) associated with any myths, especially given the stories associated with nearby Santiaguito, which at barely a century old is a single grain of sand to Fuego’s full hourglass; and especially given the ample opportunity the volcano gives for inventing outrageous beliefs in a creative imagination. For instance, many people have told me colourful descriptions: “it lights up like a Christmas tree”, “they advanced silently, like a great wave [pyroclastic flows]”. And of course, there is the tragic phrase that everyone repeats: “we were aware of the volcano before, but no-one believed that it could do this. After what happened in Los Lotes, we know what the volcano can do and we are afraid.” Now there’s a question: will there be a sequel to 2018? People continue to be vulnerable. Yesterday we visited Don Pancho, a relatively newly settled community. In 2003, 46 families moved from the town of Chimaltenango to the south side of Fuego, and bought a few parcels of fertile land, strung like green counting beads between the slats of two ravines. The land was good, and the people flourished: there are now 80 families. Although they have no memory of the destruction caused by the 1974 eruption, Don Pancho residents are well-organized and have a well-considered evacuation plan. When we visited, they were preoccupied. My colleague talked of auto-evacuation: of studying changes in Fuego’s activity and taking decisions oneself to evacuate before the danger became too great, the descent of flows cut off escape to the outside. Two questions:

“We have an evacuation plan: 12 people will stay behind to guard the houses while the others evacuate – we understand that we need to evacuate as a precautionary measure. But what will happen to these 12 people if the volcano continues to become more dangerous, when the roads are impassable? How will they be evacuated?”

I didn’t talk much on the drive back. There hadn’t been any answers forthcoming. And it’s a pretty simple observation that at a volcano like Fuego, there should be. I’m currently reading a fabulous book I recommend to you, called Timefulness. One of its arguments states that through various causes, western culture considers the Earth environment as a sphere of peace and harmony, disrupted by the occasional large perturbation that goes off like a firework in a bucket of mice. But that’s not it at all. Instead, we are travelling through a brief atoll of peace and harmony set in a rollicking sea of extreme large-scale natural events. As uncomfortable as it is to say, in some ways the Guatemalan treatment of plans as ‘fragile’ seems the more clear-sighted approach. As for Fuego, the volcano has always been active and will continue to be so. Only our presence allows for the possibility of disaster. While we do not know when it will erupt again, the continuing integration of different cultures and disciplines are necessary to prevent a sequel to 3rd June 2018.

One thought on “Sequels and serials”

The National Institute of Seismology, Volcanology, Meteorology and Hydrology (INSIVUMEH) provides a great deal of information on Fuego. Find it here.

My publications are updated regularly. You can find them and download them for free here.